“We are in a wild west situation with online behaviors, and couples are scrambling to understand them,” says marriage and family therapist, Dr. Jason Whiting, a professor at Brigham Young University (BYU).

With more couples meeting online than through friends or families these days, the rules of romance are becoming increasingly complex, including where we draw the lines between the virtual world and our real-life romantic relationships.

Dr. Whiting, who has conducted several studies on digital infidelity and co-authored a study on “Facebook cheating,” says he is counseling more couples today who are facing online “flirting or sketchy contact with others”—contact that sometimes leads to real-life infidelity. He recalls working with one married couple in their 50s who were in a “distant marriage.” To escape, the wife began spending more time on social media, where she reconnected with a childhood crush and eventually left her marriage to pursue the relationship.

Discovering just how “this new online world affect[s] the nature and quality of contemporary American relationships” is the focus of the 2019 State of Our Unions: iFidelity: Interactive Technology and Relationship Faithfulness, which was released today from the National Marriage Project at the University of Virginia, the School of Family Life at BYU, and the Wheatley Institution. The report is based on findings from a new, nationally representative YouGov survey of 2,000 married, cohabiting, and single American adults who answered a series of questions about their relationship attitudes and online and real-life behaviors.

What Counts as Cheating Online?

As I’ve written here before, defining “cheating” in the digital world is becoming more difficult to do but is more important than ever. To that end, the iFidelity report surveyed participants about nine online and real-life behaviors: sex, cybersex, sexting, real-life secret emotional relationships, online secret emotional relationships, hotchatting/sexual talk online, flirting in real life, following a former flame online, and watching pornography.

The report also explored differences in attitudes and online and real-life behaviors among the Silent Generation, Baby Boomers, Generation X, and Millennials. Overall, it found that most Americans of all generations are sexually faithful and supportive of relationship fidelity. Although it found few generational differences when it comes to what counts as real-life cheating, the findings were different regarding online sexual behaviors, with younger generations, both Generation X and Millennials, much more likely than older generations to have engaged in sexting, cybersex, online sex talk, or following a former boyfriend/girlfriend online.

The report also found generational differences in attitudes about online cheating. Not surprisingly, as lead author and NMP director W. Bradford Wilcox explains in an interview with UVA, “young adults who have come of age in the age of the Internet are the least committed to iFidelity.” For example, Millennials and Generation X are less likely than older generations to describe “real-life sexual affairs and flirting, online sexting, cybersex, sex talk, and following former girlfriends and boyfriends online” as cheating.

In a finding that corresponds with other research showing lower commitment levels in cohabiting unions, cohabiting individuals in the iFidelity survey were more likely than married individuals to have breached sexual and emotional boundaries online. For example,  24% of cohabitants report sexual talk online with someone besides their partner, versus 11% of marrieds. Cohabiting participants are also more likely than marrieds to report real-life infidelity (not shown below). 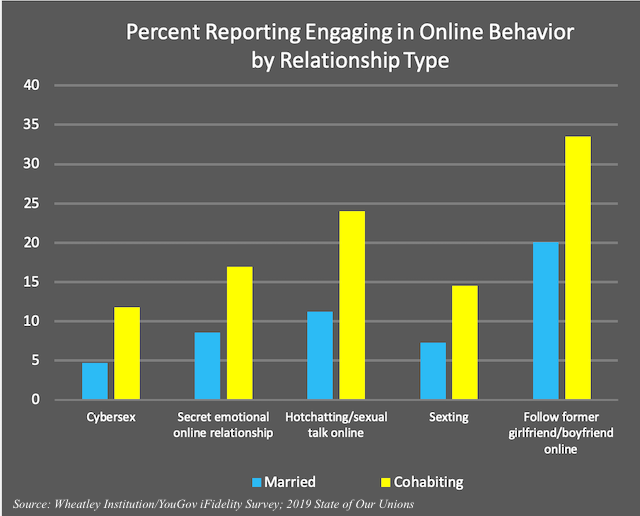 When it comes to how our online behaviors affect our real-life relationships, the iFidelity report is the first of its kind to clearly link online fidelity to our relational health. The authors measured the association between American adults’ online behaviors and their reported relationship happiness, stability, and commitment levels, controlling for things like gender, education, race/ethnicity, relationship duration, and more. The results, which are shown in the figure below, show that the happiest and healthiest relationships have strong online boundaries in place.

More specifically, the report explains that: “married and cohabiting Americans who break three or more romantic or sexual boundaries online are 26 percentage points less likely to be ‘very happy’ in their real-life relationship, compared to those who push none of those boundaries.”

What many of us who have accepted a Facebook friend request from an old childhood boyfriend or girlfriend (or sent one) might be surprised to learn is that even behavior as seemingly innocuous as following an old flame online (something most respondents did not consider cheating) is linked to lower relationship quality. 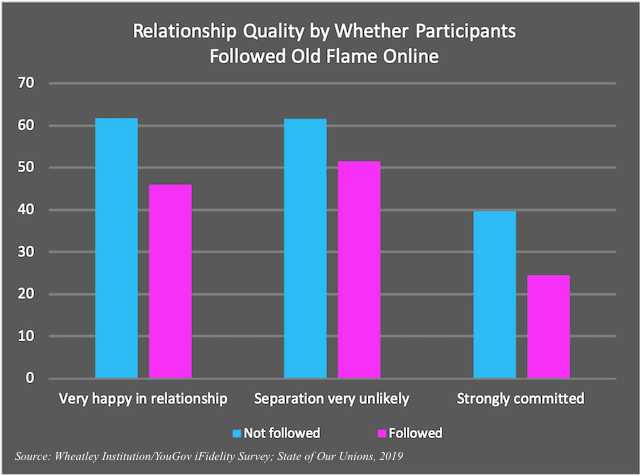 “Those currently married or cohabiting who blur these boundaries online are significantly less happy, less committed and more likely to break up,” says Dr. Wilcox, “while, conversely, those taking a more careful stance to attractive alternatives online are happier, more committed, and less likely to separate.”

For a Healthy Marriage, Build Your Online Fences Early

One finding from Dr. Whiting’s research on online fidelity that surprised him is that most couples who’ve encountered a partner’s online cheating had not talked about their boundaries beforehand:

Although everyone is online and navigating social media, most people don’t discuss what they expect from each other online until a boundary is broached. So, one partner may think it is acceptable to chat with an ex on social media, for example, but when the other partner finds out, they may feel burned.

But whether cheating happens in the virtual world or in real-life, Whiting notes, “for most couples, virtual infidelity feels just like physical infidelity.”

That’s why he advises couples to talk early in their relationship about their online boundaries. “I suggest couples have upfront conversations about what is, and is not, acceptable regarding tech,” he says. “Do they share passwords or Instagram accounts, and can they be Facebook friends with exes? How do they feel about pornography and related sites?”

He adds, “It helps to understand things upfront rather than have things come up which are hurtful and may lead to more deceptive and sneaky behavior.”

It’s great advice in light of the findings from the iFidelity report. But given the fact that younger generations are more likely to engage in online cheating and that today’s teenagers are even more immersed in the virtual world than Millennials were when they were growing up, it is also vital that parents discuss online fidelity with their adolescent sons and daughters. Teens are navigating a world where their most intimate relationships often play out on social media and over text messaging rather than in person, which makes establishing online relationship boundaries even more important.

“What [young people] probably don’t realize,” warns Dr. Wilcox, “is that they could pay a big relational price in the real world for pushing emotional and sexual boundaries in the virtual world.”  Not only do adolescents need to hear this warning along with young adults, but they also need to know that setting online boundaries early on in their relationships can help protect them and those they love.

For all of us who spend any time online, from adolescents to senior citizens, the most important takeaway from the iFidelity report, according to Wilcox, is that “Americans enjoy the highest-quality, committed, and most stable relationships when they have good electronic fences up.”