The Future of the Church – Katie Prejean McGrady

These remarks were given at the Catholic Women’s Forum event, “The Future of the Church: Synod, Scandal, and Solace” on November 29, 2018, in Washington, D.C. by Katie Prejean McGrady. Katie’s remarks can be downloaded here.

I was in junior high when the Boston Globe published the now famous Spotlight story about clergy sex abuse. 8th grade. I was fairly faithful in comparison to my fellow middle schoolers – a regular youth group attendee, I owned a t-shirt that said “Jesus is my homeboy,” and I played my violin in the choir at Mass. I remember hearing the news report one evening while standing in the kitchen with my family and asking my parents what the news anchor meant when he said that priests had abused kids. Those words didn’t make much sense to my thirteen-year-old mind. Almost 20 years later, and now a parent myself, I can only imagine how tough that question must have been for them.

That was their simple answer. They left it at that. We didn’t really talk about it again.

But, a few months later, when it came out that a priest of my own diocese that my family had grown very close to (he was a visiting priest who had come to Lake Charles from New Jersey just a few years before, been assigned to our parish, was very involved with the youth ministry, altar servers, and the school) had been arrested for credible allegations of abuse in his previous diocese, that concept of “even priests can do bad things sometimes” hit hard. Because this was a priest I had trusted, who’d come into our home, who’d been involved in our lives. The bigger they are in your life, the harder they fall…

Even priests do bad things – and even bishops, and cardinals, and our Church’s history is certainly not one of perfect pope after perfect pope. Even priests can do bad things. Awful things. Disgusting things. Terrifying things. And that’s hard to hear, to believe, accept, and it’s hard to say ‘I’m Catholic” right now when we know this has happened.

I think that’s one of the reasons this particular “round” of the abuse crisis hurts so much right now and it feels like we’re stuck in a very dark tunnel with no light breaking through at the end. It’s a very hard pill to swallow: that anyone, even the leaders of our Church, can do bad things, and have done bad things. Knowing that is not just a theoretical idea, but is the reality we currently face, and learning about these bad things, and coming to grips with it, is very hard.

When young adults, especially millennials, who are already mistrusting of institutions, are at best “nominally” Catholic (statistics show that only 14% of millennial Catholics attend Mass on Sunday), and think of the Church and institutionalized religion as just “another option” from which to choose in order to “be good,” news of priests, bishops, and cardinals “doing bad things” doesn’t’ make the job of evangelizing youth and young adults any easier.

The Synod on Young People in October, at its root, was about this – how to evangelize youth and young adults and articulate to them that the Church is their home and that we want them here because the Church holds the answers to their biggest questions, has the truth they’ve been seeking, and is the place where they can and will encounter Jesus Christ, who is the Way, the Truth, and the Life. Yes, it was about a lot of other things too – and much more was said and discussed and written, and will still be written for months to come – but at its root, I believe, and hope, it was about that.

By holding the pre-synod in March, which I was privileged to attend, the Vatican signaled that listening to young people was just as important as talking about the. In our small group discussions, late night writing sessions, and even as we just sat around at the dinner table passing bottles of wine, it became evident that all of us ­– from around the world – had a common hope: that the Church would not only take us young adults seriously, recognizing what we had to offer, but that the Church would also be unafraid to be the bold, unapologetic, life-giving beacon of truth and hope that she is, proclaiming that truth to the world, inviting all to meet and encounter Jesus Christ within.

As we’ve seen for generations, but especially in recent years, it’s already very hard to do that – proclaim that truth. St. Augustine tells us the truth doesn’t need defending. It’s like a raging lion that just needs to be set free. The question is: have we set the truth free, or have we hidden it away, scared to offend or displease others?

In a world of consumerism and materialism, where there is literally a new phone named “excess” (and I, embarrassingly, bought it), how can the Church’s message of simplicity, generosity, and asceticism ring true?

In a world of relativism, how can the Church teach the truth when “my truth” and “your truth” don’t necessarily have to jive, so long as we don’t’ hurt one another?

In a world of political backbiting and infighting, with the slow death of civil discourse at every level, how can the Church teach and proclaim dialogue, accompaniment, and companionship when no one is listening to begin with?

In a world of constant noise, with notifications constantly dinging, social media always updating, the news always on, how can the Church announce the absolute necessity of silence and peace?

And really, how can the Church do anything at all right now when the headlines are “priests abused kids” followed by “bishops covered it up for years.”

I think right now, this is what many young adults have in the front of their minds: how does anything else matter – even the good and necessary work and action plans from the Synod on Young People – when abuse at every level is being uncovered bit by bit? And, although it seems the Vatican is taking steps to address this crisis from the top down with this meeting in February, why aren’t things moving faster, and why aren’t important questions being answered right now? Why delay action steps at the November meeting? Why a seeming fear of lay oversight? Why so many questions and so few definitive answers?

I watched the general sessions of the USCCB meeting earlier this month, streaming it to my iPad while chasing my 1 year old around the house, a very different experience than the one I had in June when I was honored to address the USCCB about my pre-synod experience. And, while I was certainly encouraged by the words of some of the bishops about their own hurt and frustration and worries concerning this current crisis and what actions they want to take, I also thought the way many of my millennial peers do: “Who cares about a meeting? Stop talking, start doing. And for goodness sake, will someone please just admit that you all messed this up, you all need to own this, and actually show us how you won’t let it happen again?” Perhaps that’s harsh to say, and knowing many of the bishops in that room personally, I know they agree that now is the time for action, but as someone who usually believes that an email is far more efficient than a meeting, this meeting seemed to be just lots of talking and not much doing. And for young people – who hear an awful lot about an awful lot – it didn’t mean much.

At the pre-synod in March, which now seems like years ago, though it was only 7 months, one of the questions we discussed at length was how young people today perceive the institution of the Church, namely the hierarchy and leadership. In my small group, made up of people from Latvia, Germany, England, Ethiopia, Ghana, South Korea, China, Sweden, Israel, and Switzerland, it was said on numerous occasions that, at times, it seems that the hierarchy of the Church have become a collection of managers, not ministers, and politicians, not pastors. Not all bishops, mind you, and not all the time. But a number of them, distant and locked away in chanceries. To this end, in the final document of the pre-synod, which was meant to be read like a letter to the bishops at the Synod in October, we wrote: “We want to say, especially to the hierarchy of the Church, that they should be a transparent, welcoming, honest, inviting, communicative, accessible, joyful, and interactive community.”

I think, then, this is the way forward for young adults: a USCCB, a Vatican, parish priests, diocesan bishops, cardinals in the Curia – anyone really, in a position of authority in the Church (from the nice older woman who designs the parish bulletin to the Pope himself) should be transparent, accessible, honest, forthcoming, and unafraid to speak the truth, no matter how hard the truth is to say or hear, whether on current crises or difficult and challenging church teachings that push against the cultural milieu of the day.

If there is one thing that characterizes my generation, it’s that while we like our Instagram filters and our perfectly captioned photos and our curated content and binge-watching our favorite shows commercial free and not necessarily going to Mass regularly, we do not like fluff, scams, inauthenticity, or being lied to. The only way forward, then, is to be that honest, communicative, accessible leadership of the Church that we not only want, but need, in this moment. Otherwise, young adults especially will continue to not show up, to stay away, to question the entire institution of the Church, doubt the teachings, and write her off as a den of old men who can’t seem to agree or answer basic questions, rather than see her as the Body of Christ that gives life, and of which we are all members who play important roles. 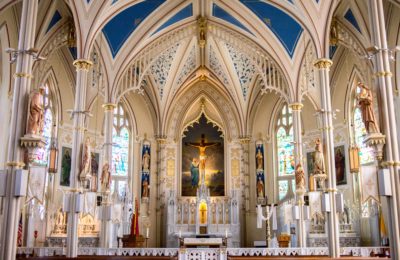 USCCB President’s Statement on the Inauguration of Joseph R. Biden, Jr., as 46th President of the United States of America